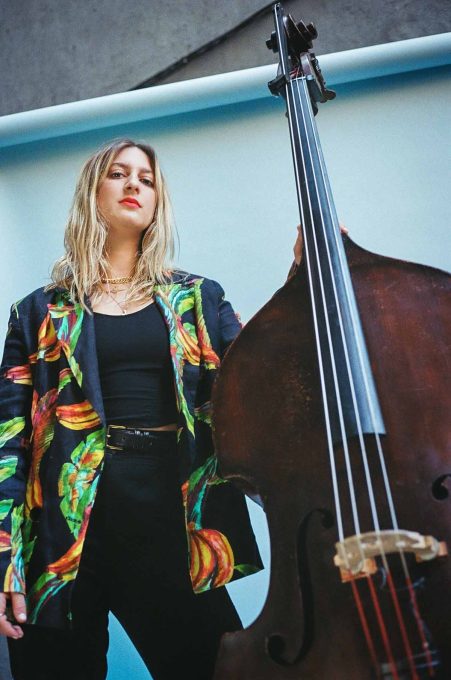 She had been fortunate to have studied with Master Musicians such as Ron Carter, Reggie Workman, Bob Cranshaw, Miguel Zenon, Jim Mcneely, Dave Leibman and many others. Since Moving to New York, She has played with many greats such as Joel Frahm, Joe Magnarelli, Steve Nelson, Charli Persip and many others around the NYC area in highly renown venues such as Mezzrow, Smalls jazz, The Jazz Standard, Smoke and others.

Meyerson has also played and recorded with contemporary artists such as SEENA, Verite, The Side Project, Fielded, MUMU, Melissa McMillan, Camile Trust, Doe Paoro, Kimbra and others. As a Member of the Pop Chamber orchestra “Little Kruta” and has recoded and performed with them on Jimmy Fallon, as part of The hum Series, at National Sawdust and many other venues around NYC.

On her debut record, “Where We Stand,” Meyerson showcases her talent as both a Bassist and Composer with an All Star Band featuring special guest vocalist and guitarist Camila Meza, tenor saxophonist Joel Frahm, trumpeter Freddie Hendrix, pianist Mike King and drummer Kush Abadey. The Album was very well received and Meyerson’s music was referred to as “Intuitive and perspicacious, that displays a musical maturity that belies her newcomer status.”Downbeat Magazine.” Her band has headlined the “Make some Noise” music festival in May 2016, Center City Jazz Festival in Philadelphia in 2019 as well as the international Guatemala Jazz Festival in 2019. She has also performed all over the US, Latin America and Canada with her trio and as a side woman. Meyerson is a 2020 recipient of the NYFA women’s grant, and is set to record and release her sophomore album in late 2021.

As an Educator, Meyerson has worked with Jazz at Lincoln Center as part of the “Jazz For young people” program, preforming in schools around the NY area, “The Jazz Power initiative” Directed by Eli Yamin, “Little Chopins” and the “Stanford Jazz workshop”. Adi also teaches at JAZZ HOUSE KiDS as part of their yearly Chica Power Residency. In December 2017, She had a chance to travel to Guatemala to teach in the Quezaltinango international Jazz camp with her trio.