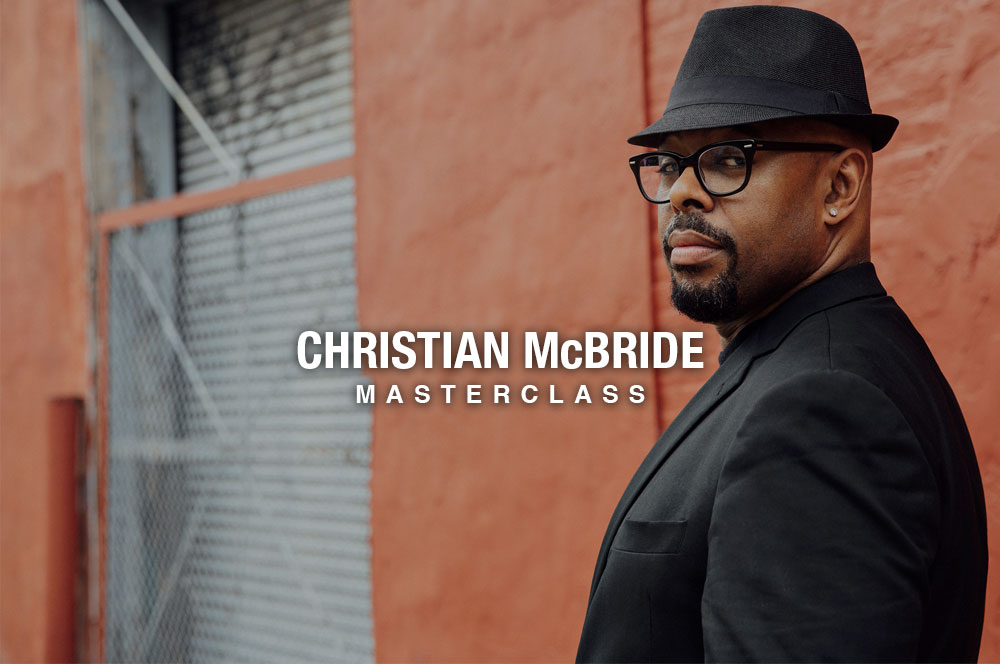 On Wednesday April 29, Jazz House Kids will present a masterclass with our Artistic Director and master bassist, Christian McBride. This session will be a Rhythm Section Masterclass from the perspective of the bass player. All instrumentalists are welcome!

Bassist extraordinaire, composer, arranger, educator, curator and administrator, Christian McBride, has been one of the most important and most omnipresent figures in the jazz world for 20 years.

Beginning in 1989, this Philadelphia-born bassist moved to New York City to further his classical studies at the Juilliard School, only to be snatched up by alto saxophonist, Bobby Watson. Since then, McBride’s list of accomplishments have been nothing short of staggering. As a sideman in the jazz world alone, he’s worked with the best of the very best – Freddie Hubbard, Sonny Rollins, J.J. Johnson, Ray Brown, Milt Jackson, McCoy Tyner, Roy Haynes, Chick Corea, Herbie Hancock and Pat Metheny. In the R&B world, he’s not only played with, but also arranged for Isaac Hayes, Chaka Khan, Natalie Cole, Lalah Hathaway, and the one and only Godfather of Soul himself, James Brown. In the pop/rock world, he’s extensively collaborated with Sting, Carly Simon, Don Henley, and Bruce Hornsby. In the hip-hop/neo-soul world, he’s collaborated with the Roots, D’Angelo, and Queen Latifah. In many other specialty projects, he’s worked closely with opera legend Kathleen Battle, bass virtuoso Edgar Meyer, the Shanghai Quartet and the Sonus Quartet.

Since 2000, McBride has blazed a trail as a bandleader with the Christian McBride Band. McBride’s fellow bandmates – saxophonist Ron Blake, keyboardist Geoffrey Keezer and drummer Terreon Gully – have sympathetically shared McBride’s all-inclusive, forward-thinking outlook on music. Releasing two CD’s – 2002’s “Vertical Vision”, and 2006’s “Live at Tonic”, writer Alan Leeds called McBride’s band (affectionately known as the “CMB”) “one of the most intoxicating, least predictable bands on the scene today.” It is a group that has mesmerizingly walked an electro-acoustic fault line with amazing results.

Currently he hosts and produces “The Lowdown: Conversations With Christian” on SiriusXM satellite radio and National Public Radio’s “Jazz Night in America,” a weekly radio show and multimedia collaboration between WBGO, NPR and Jazz at Lincoln Center, showcasing outstanding live jazz from across the country. With his staggering body of work, McBride is the ideal host, drawing on history, experience, and a gift for storytelling to bridge the gap between artist, music, and audience. He brings that same breadth of experience to bear as Artistic Advisor for Jazz Programming at the New Jersey Performing Arts Center (NJPAC).

Whether behind the bass or away from it, Christian McBride is always of the music. From jazz (Freddie Hubbard, Sonny Rollins, J.J. Johnson, Ray Brown, Milt Jackson, McCoy Tyner, Roy Haynes, Chick Corea, Herbie Hancock, Pat Metheny, to R&B (Isaac Hayes, Chaka Khan, Natalie Cole, Lalah Hathaway, and the one and only Godfather of Soul himself, James Brown) to pop/rock (Sting, Paul McCartney, Carly Simon, Don Henley, Bruce Hornsby) to hip-hop/neo-soul (The Roots, D’Angelo, Queen Latifah) to classical (Kathleen Battle, Edgar Meyer, Shanghai Quartet, Sonus Quartet), he is a luminary with one hand ever reaching for new heights, and the other extended in fellowship—and perhaps the hint of a challenge—inviting us to join him.