[January 13, 2022 – New York, NY] – On Monday, February 28, 2022, RALPH PUCCI International presents its 6th Annual JAZZ SET, “The Lowdown: Conversations with Christian®,” a spectacular evening of concert and conversation with two music titans. This year’s JAZZ SET fundraiser brings together for the first time two international music luminaries for one night only: global phenomenon NORAH JONES, 12x-platinum album singer/songwriter with an armload of GRAMMYs and awards, with one of the today’s most omnipresent figures in jazz CHRISTIAN McBRIDE, virtuosic bassist, composer, 7-time GRAMMY winner and Artistic Director of the Newport Jazz Festival.  Big fans of each other’s work and stellar careers, Jones and McBride will deliver a once-in-a-lifetime evening full of surprises and tremendous good vibes as they trade solos, tell stories about life in the music business fast lane, and share their creative and personal philosophies.

The backdrop of this exceptional musical pairing is the ultra-modern 30,000 square-foot New York City showroom + warehouse of RALPH PUCCI International, a special setting filled with limited-edition designs, from furniture to lighting to art.  This is the sixth year Ralph Pucci has partnered with JAZZ HOUSE KiDS and its Artistic Director Christian McBride to turn the New York luxury furniture design gallery into a world-class jazz club. McBride’s past special guests have included Wynton Marsalis, Diana Krall, Laurie Anderson, John Pizzarelli and Esperanza Spalding.

Following an exclusive champagne and hors d’oeuvres reception, Norah Jones and Christian McBride will take the stage for The Lowdown: Conversations with Christian®.  The evening’s performance and casual conversation format mirrors the SiriusXM Real Jazz series that McBride hosts and produces.

VIP packages start at $500.  COVID protocols including required booster shot and testing will be strictly followed by everyone on site.  Also available are Virtual Backstage Private Access tickets starting at $100 and post broadcast.

This exclusive benefit supports JAZZ HOUSE KiDS, an award-winning nonprofit that for 19 years has been transforming young people’s lives through music, mentoring, education and leadership. The JAZZ HOUSE is one of the top organizations in the nation with a mission to provide access to jazz education in under-resourced communities, while training tomorrow’s emerging stars, serving all students, regardless of their financial circumstances.

While February 28th’s RALPH PUCCI Jazz Set will be the first time Jones and McBride perform together, the two celebrated musicians have much in common and have been following each other’s careers closely.  Both grew up in musical families and attended performing arts high schools – Jones at Booker T. Washington School of Performing & Visual Arts in Dallas and McBride at Philadelphia’s High School for Creative & Performing Arts. That access to quality music education and music mentors served as a precipice to early success in their careers.

Jones is happy to lend her support to JAZZ HOUSE KiDS, whose award-winning early training, mentoring and apprenticeship programs have served as a stepping stone for many students to attend jazz programs at prestigious colleges and conservatories across the country.  Many other alumni carry the artistic edge and confidence gained at JAZZ HOUSE KiDS across many careers, becoming tomorrow’s community leaders and global citizens. 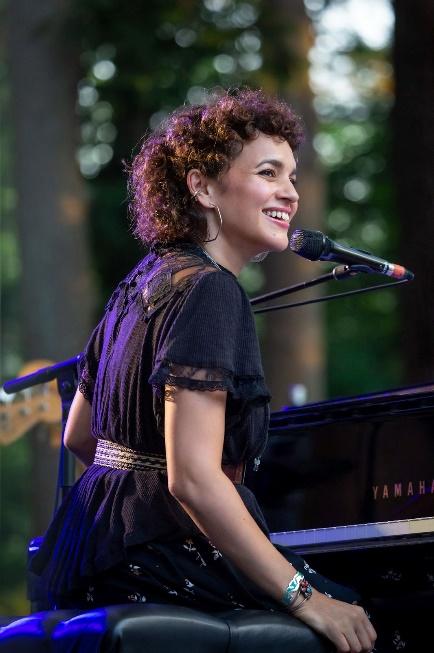 The nuanced, smoky voice of Norah Jones has captured the hearts and minds of millions of music fans around the world.  She first emerged on the world stage at age 23 in 2002 with the stratospheric launch of Come Away With Me, her self-described “moody little record” that introduced a singular new voice and grew into a global phenomenon, sweeping the 2003 GRAMMY Awards. Since then, Norah Jones has become a household name, winning nine GRAMMYs, selling more than 50 million albums, and having her songs streamed six billion times worldwide.

In addition to her latest holiday album release in 2021, Jones has released a series of critically acclaimed and commercially successful solo albums, and albums with her collective bands The Little Willies, El Madmo, and Puss N Boots.  She has showcased her incredible versatility with her collaborations with artists as diverse as Willie Nelson, Outkast, Herbie Hancock, and Foo Fighters. Since 2018, Jones has been releasing a series of singles with artists and friends such as Mavis Staples, Jeff Tweedy, Thomas Bartlett, Tarriona Tank Ball, Rodrigo Amarante, and Brian Blade. Some of these collaborations are compiled on the 2019 singles collection, Begin Again.

More than an artist of note, seven-time GRAMMY Award-winning bassist Christian McBride is one of jazz’s foremost intellectuals who, in recent years, has been tapped to take on a series of high-profile appointments, including becoming Artistic Director of the Newport Jazz Festival.  In addition to hosting and producing The Lowdown: Conversations With Christian® on SiriusXM radio, McBride hosts and produces NPR’s “Jazz Night in America,” a weekly radio show and multimedia collaboration between WBGO, NPR and Jazz at Lincoln Center that showcases outstanding live jazz from across the country.

RALPH PUCCI International is a luxury furniture, lighting and mannequin company based in New York City. What began as a family business in the 1950s fabricating mannequins has grown to a gallery and showroom regarded as one of the best in the world, with outposts in Miami and Los Angeles.

Music plays an instrumental role in sustaining and nurturing the well-being of young people and adults alike.JAZZ HOUSE KiDS ensures equity and access to world-class music education, supports healthy communities through jazz, and celebrates all people with mutual respect, both on and off the bandstand.  The organization has doubled down on its efforts to address student learning loss and reduce the social and emotional stress caused by the pandemic, through programs in underserved schools, after-school programs at the JAZZ HOUSE studios, and community events including the “no tickets required” MONTCLAIR JAZZ FESTIVAL attended by 25,000 jazz fans in 2021.